Reggae bands have been filling out mainstream music festivals at a rapid pace recently, and SweetWater follows suit.

The 2016 SweetWater Brewing Company 420 Festival in Atlanta, Georgia has become one of the most prominent music festivals in the south since its inception in 2011. Over the last five years, reggae bands have headlined and filled out the meaty portion of this festival’s lineup with the likes of Steel Pulse, The Wailers, Slightly Stoopid, 311, Sublime with Rome, Dirty Heads and many more. But, make no mistake, this is not a reggae-centric music festival. 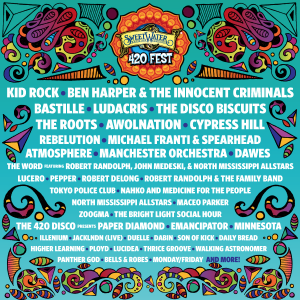 This year’s festival lineup features Kid Rock, Ben Harper & the Innocent Criminals, Ludacris, Cypress Hill, The Roots and Atmosphere, among many more hip-hop, rock and pop artists and bands. However, some of the highlights for this year’s festival will include Michael Franti & Spearhead, Rebelution, Pepper and Nahko & Medicine for the People, all bands that could potentially be pigeonholed into the reggae genre.

The 2016 SweetWater Festival will take place from April 22-24, 2016 in Atlanta, Georgia. The venue for this year’s edition will be Atlanta’s Centennial Olympic Park.

Along with a star-studded lineup, spanning all genres, SweetWater Festival will also feature craft beer tasting, a non-profit village, a 5k race in honor of earth day, late night comedy shows and nearly 20 various food and beverage vendors for the patrons’ consumption throughout the three-day festival.

Tickets are currently available at $123 for 3-day festival passes and $52 for single day tickets.

For more information on the SweetWater Festival, follow the links below.