Maui’s preeminent roots-reggae band will be taking the new album on the road for a 2016 West Coast tour.

With over a decade of experience recording and performing live, Inna Vision has steadily grown into a veteran band in the reggae genre. Sharing the stage with such prominent names like Damian Marley, SOJA, Rebelution, Steel Pulse, Don Carlos, Barrington Levy, J Boog, Tribal Seeds and Collie Buddz, the albums the band produces gives much validity to their live performances with those bands and artists. 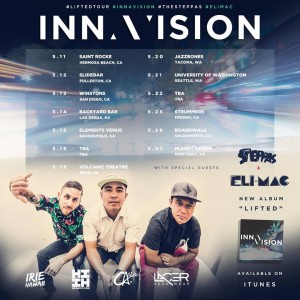 Most recently, Inna Vision’s new album, Lifted, debuted on the Billboard Reggae Chart, surpassing the most recent studio effort from fellow Hawaiian based band, Iration. Lifted also peaked at #4 on the iTunes Reggae Chart upon its release on March 4, 2016.

Inna Vision is known as Maui’s first original roots-reggae band and has been considered one of Hawaii’s foundation roots-reggae bands, with the overall message promoting love from Hawaii to the world. With over ten U.S. nationwide tours, reaching over 60-cities and nearly 25-states, Inna Vision will once again tour the West Coast this spring.

Beginning on May 11th, Inna Vision’s Lifted Tour will begin in Los Angeles County at Saint Rocke in Hermosa Beach, California. In all, Inna Vision will perform 13 shows in 16 days, including seven shows in California, two shows in Washington and one show each in Oregon and Las Vegas, respectively. One highlight of the tour features Inna Vision as after hours entertainment for the 7th annual California Roots Music and Arts Festival on May 27th at the nearby Planet Gemini nightclub.

Joining Inna Vision on their mainland tour dates will be fellow Hawaiian reggae acts, The Steppas and Eli-Mac.

For more information on Inna Vision, follow the links below.