The jewel in the crown of Northern England’s festival calendar, the beloved Beat-Herder Festival is back in 2016.

Originating from roots as a free rave on the Lancashire moors in 2006, the Beat-Herder Festival has grown to where it is today thanks to a swift word-of-mouth growth and a devout army of fans who come back year after year. Despite its increasing popularity, the organisers intentionally cap the tickets at an intimate 12,000 to maintain it’s egalitarian feel. 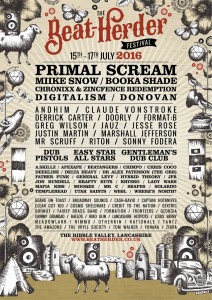 Following its huge 10th birthday celebrations last year and first line-up announcement last month, Beat-Herder reveal its second wave of artists for 2016. Thus far, the lineup for the 2016 edition of the Beat-Herder Festival is impressive in terms of reggae representation.

Performing on the main stage will be Jamaican reggae revivalist, Chronixx, alongside his Zincfence Redemption Band, and Easy Star All Stars, Gentleman’s Dub Club, General Levy, and many more reggae music bands and artists will be featured throughout the festival.

So much more than a music festival, Beat-Herder houses a Working Men’s Club, comedy stage, a tattoo parlour, yoga classes, workshops including knitting and woodturning, mass-participation games, pop-up performances, a fun-fair and many more surprises round every corner for attendees to enjoy.

The Beat-Herder Festival will take place on July 15-17 in Ribble Valley, Lancashire. Tickets for the three-day festival are available, starting at $165 or £144.70.

For more information on the Beat-Herder Festival, follow the links below.