After 23-weeks since the release of Set In Stone, the 2015 release still holds the Billboard #1 spot.

In the reggae genre, it is common for the most recent album release to peak at the number one spot on iTunes and the Billboard Reggae Chart. The increased awareness spread through social media accounts can often times boost record sales for rapid results. However, those results tend to waiver as time marches on. The true testament of a terrific album is longevity and consistent success. 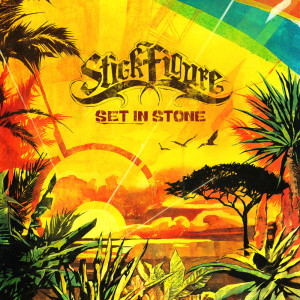 Set In Stone, will once again be the number one album on the Billboard Reggae Chart to end the month of April. And, there are no signs of this current streak ending any time soon.

On November 13, 2015, Stick Figure released its sixth, full-length studio album titled, Set In Stone, as the follow up to Burial Ground (2012). Both of the last two releases from Stick Figure are among the top six highest selling reggae albums, according to the iTunes Reggae Albums Chart. The only other artist or band that can share that recognition is Bob Marley & The Wailers.

Stick Figure’s rapid ascent to the “catbird seat” in American reggae can be greatly attributed to their influx in touring since 2012. Prior to the release of Burial Ground, Stick Figure was known as a studio band, as founder, multi-talented musician, singer and producer, Scott Woodruff, would only perform locally. As the Stick Figure name began to make headway in the genre, Woodruff hit the road with a touring band comprised of Kevin Bong (Keyboards/Vocals), Kevin Offitzer (Drums/Vocals) and Tommy Suliman (Bass).