One of the leading American based roots-reggae-dub outfits has announced new tour dates this spring.

John Brown’s Body has built a legacy that has inspired and carved a path for the now thriving contemporary American reggae scene today. Formed in Ithaca, New York in the 1990s, at a time when there wasn’t popular demand for reggae bands to tour in the United States, John Brown’s Body was one of only a handful of American based reggae bands that began to tour nationally. 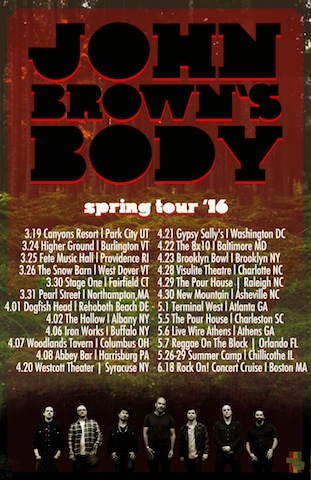 John Brown’s Body is a seminal band in American reggae. With over two-decades of experience, JBB has achieved numerous accolades in their career. Beginning in 1996, the band’s first album All Time was featured as one of “Top 10 Indie Records List” according to Rolling Stone Magazine. After the release of Sprits All Around us in 2003, John Brown’s Body became a fixture on the national festival scene, performing at Wakarusa, Sierra Nevada World Music Festival, Reggae on the Rocks and Bob Marley Day in Florida, alongside Lauryn Hill, among others.

Still riding the wave from Kings and Queens and the subsequent remix album, Kings and Queens in Dub (2015), JBB has remained relentless on the road, performing throughout the United States, the UK, Europe and New Zealand over their career.

Some of the tour highlights will be festival dates at Reggae on the Block in Florida, which features performances by Chronixx, J Boog, Collie Buddz, Common Kings, among others, and Summer Camp Music Festival outside of Chicago, which will host headlining performances by The Roots, Umphrey’s McGee, Thievery Corporation, Fishbone and Giant Panda Guerilla Dub Squad, among many more.

For more information on John Brown’s Body and all upcoming tour dates, follow the links below.