Perhaps the premier island reggae music and culture festival in the United States announced another round of artists.

The 5th annual Island Reggae Festival has been set for July 9, 2016. The festival will be held at the Santa Clara County Fairgrounds, a much larger venue than previous years at Redwood Amphitheater. With over 60-acres of outdoor space and 167,000 square feet of indoor space, the fifth annual Island Reggae Festival is set to be the largest edition to date. 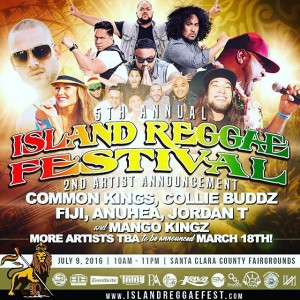 Island Reggae Festival continues to showcase worldwide and local renown artists and bands. As the first artists were announced this past week, that sentiment holds true. The first and second round of artists have revealed some of the best in Hawaiian reggae and the most renowned artist from Bermuda.

The artists announced were headliners Common Kings, Collie Buddz, Fiji, Anuhea, along with the Mango Kingz and one of the top-tier solo artists in island reggae music, Jordan T. The 5th annual Island Reggae Festival will be the debut performances at this event for both Collie Buddz and Jordan T, while Common Kings and Fiji will be returning as veterans of this festival for the third time in five years, respectively, while Anuhea will be returning to the Island Reggae Festival for the second time since.

Obviously, there will be more artists to be announced as the event draws near. Looking back on previous years of this festival, the lineup has always been stocked full of international talent. Some of the artists to be featured over years past include, Morgan Heritage, Third World, J Boog, Rebel SoulJahz, House of Shem, Kapena, Maoli, Spawnbreezie, Drew Deezy, Tenelle, Sammy J, Pieter T, Three Houses Down, Jimmy Weeks Project, and many more.

Currently, tickets are available for $60 dollars for General Admission and $150 for VIP Passes. However, that current sale will end on May 9th.