The reggae ambassadors from Jamaica have booked a fully-loaded touring schedule to begin the 2016 calendar.

With nearly half a century of tenure in the reggae genre, Third World have proved that they are still going strong. To begin 2016, Kingston, Jamiaca’s Third World will travel to New Zealand, Australia and the United States for headlining performances. 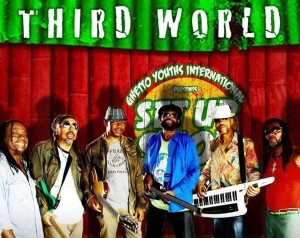 Third World is more than just one of the top Reggae bands of all time, it is an institution that stands for producing and performing music that, while holding firm to the cultural and ancestral roots of its members, still pushes forward the cutting edge of music worldwide. It is an institution whose themes are positive, progressive and internationally relevant.

Beginning on February 4th, Third World will begin their multi-continent touring schedule in New Zealand in preparation for their headlining performance at Aotearoa’s One Love Music Festival in Tauranga, New Zealand.

In the span of two weeks, Third World will perform with J Boog and Nattali Rize of Blue King Brown in New Zealand and Australia before heading to the United States for three consecutive shows in Florida.

While performing in the southern most state in America, Third World will be performing alongside the original Wailers on February 26th and 28th, before headlining Caribbean Night in Lauderhill, Florida on March 5th.

For more information on Third World and all upcoming tour dates, follow the links below.