For those searching for a true world music, roots festival in the United States, your search is over. 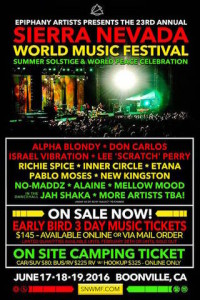 As this is only the first artist announcement revealed, looking back on previous lineups, some of the top-tier reggae artists have performed at the SNWMF over the years, such as Alborosie, Barrington Levy, Damian Marley, Stephen Marley, Jimmy Cliff, Steel Pulse, Yellowman, Third World, Groundation, Protoje, J Boog, Common Kings and Stick Figure, among countless more headlining acts.

It is safe to say, that some of the aforementioned touring acts will be returning for the 23rd annual Sierra Nevada World Music Festival. After all, the Northern California reggae festival has never been afraid to invite return performers over their lengthy history.

The festival will continue to feature two outdoor stages and a late night Jamaican style dancehall, featuring artists from around the world. Food and merchandise vendors will also do the same, offering delicious edibles, crafts and art from West Africa, Indonesia, Jamaica, Ethiopia and India.

The 23rd annual Sierra Nevada World Music Festival will be held on three-consecutive days, from June 17-19, 2016. Early Bird prices for three-day passes are currently available at $145.