One of the more recognizable sounds in world music, Michael Franti has announced his tour dates for 2016.

Michael Franti, a outspoken supporter of all things social justice and world peace, especially in the more deprived places on earth, such as the Middle East. Michael Franti and his backing band, Spearhead, have compiled a total of eight full-length albums since their original formation in 1994, including the Billboard Top 200 albums Yell Fire! (#125 in 2006), All Rebel Rockers (#39 in 2008) and Sound of Sunshine (#17 in 2010). 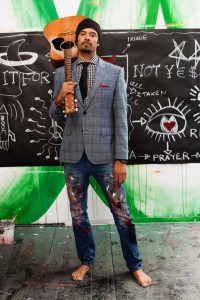 Michael Franti has contributed much more to the world than just his inspirational music. Over his long tenured career, Franti has won the Domestic Human Rights Award by Global Exchange a Non-Governmental Organization based in San Francisco for his work to end war in the Middle East, which included his documentary I Known I’m Not Alone (2005).

The film aims to speak multiple generations and to give people a better understanding of the people who still live in war-torn countries. He did not embark on the trip for the film with any special government groups or organizations, but instead bought plane tickets and headed off to Iraq, the Palestinian territories, and Israel armed with nothing more than his guitar and an extreme passion for music and a love of people.

Some of the highlights of The Soulrocker Tour will be headlining festival appearances at the Bottlerock Festival in Napa, CA, California Roots Music and Arts Festival, Sweetwater 420 Festival in Atlanta, GA, Mountain Jam Festival in New York and the Thunder Vibes Festival outside of Sacramento, California.

Michael Franti has been sharing some videos of his studio recording process over the past few months. So, fans attending one of his live performances might be in for a treat with never before heard new music from Michael Franti and Spearhead.

For more information on Michael Franti and Spearhead, follow the links below.