Always one of the more picturesque outdoor festivals of the year has announced their lineup for the 2016 edition.

Hosted along the Gulf Shores of Alabama, the Hangout Music Festival is one of a kind in the United States. Fans and bands alike, enjoy the weekend festivities that the Hangout Festival provides along the white sand beaches in Gulf Shores, AL. 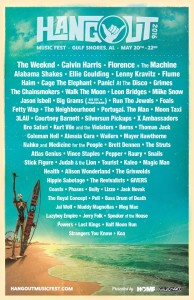 In 2016, the Hangout Festival will feature performances by roots, reggae legends The Wailers, as well as some of today’s most prominent acts in the reggae genre including, Pepper, Stick Figure and Nahko and Medicine for the People.

Over the years, reggae music has been featured at a much higher rate at mainstream festivals, such as the Hangout Festival. Over previous years, the Hangout Festival has featured reggae bands like Slightly Stoopid, Matisyahu, Iration, The Expendables, The Green and many more.

For more information on Hangout Festival 2016, follow the links below.