Some of the best local talent from O’ahu, Hawai’i will be touring the United States.

Three of Hawaii’s finest local musicians and solo singers will be joining together on The Forward Steady Tour throughout the west coast in the United States, beginning on January 14, 2016. 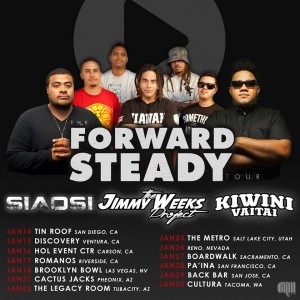 The trio will consist of The Jimmy Weeks Project, Siaosi and Kiwini Vaitai, all members of the EKM Records family on the island of O’ahu. All three are very familiar with touring the mainland, as both headliners and special guests for the likes of J Boog, Common Kings and Fiji, among others.

The tour will kickoff in San Diego, CA before making appearances in Las Vegas, Phoenix, Salt Lake City, San Francisco and the tour finale in Tacoma, Washington on the 30th of January. Other cities on the 14-date tour include, Ventura, Carson, Riverside, Sacramento and San Jose in California, Tuba City, Arizona and Reno, Nevada.

All three of these recording and touring artists have been mainstays on Hawaiian radio stations throughout their careers, including The Jimmy Weeks Project’s most recent singles “Homegrown”, “Mixed Up”, “Quick Tongue” and many more.

In the same light, Siaosi has just released a new single, “Reggae Party” that has received constant rotation on all three local reggae radio stations in Honolulu. And, in Kiwini Vaitai’s case, it seems like every few months a new single is released, reaching the top spot on the Top 5 most requested countdowns throughout the Hawaiian Islands. Some of the songs featured at number one have been “Put Up Your Glasses”, “Roses & Thorns”, “Never Grow Cold” and “Hard Times”.

As is the case with many local Hawaiian bands or singers touring the mainland, tickets for these showcase tours typically sell at a rapid rate. So, be sure to mark your calendars for the upcoming Forward Steady Tour in 2016.

For more information on The Forward Steady Tour and all three artists, follow the links below.