One of the most recognizable reggae acts, Steel Pulse, will be returning to Hawai’i.

Steel Pulse is known as the first non-Jamaican reggae band to win a Grammy Award in 1986 for the band’s Babylon the Bandit album. But, Steel Pulse’s career has been far more substantial than just that accolade. 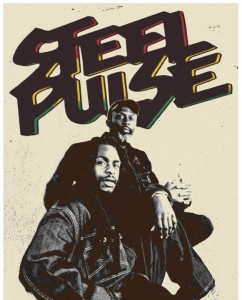 Since the band formed in 1975, Steel Pulse has released 11 studio albums, two live albums, and has been featured on a multitude of worldwide music compilations. Steel Pulse is known for their heart-wrenching and soul-touching lyrics about real world problems, racial tension, and community uprising throughout the world, including their home base of the United Kingdom.

Steel Pulse can certainly be labeled as one of the hardest working touring acts in all of the reggae genre. And, with the calendar turning from 2015 to 2016, Steel Pulse is set to embark on yet another tour with performances in the United States, Hawai’i, New Zealand, Australia and Jamaica.

The tour calendar for Steel Pulse will begin on January 28, 2016 in Reno, Nevada, before a string of shows in California, with tour stops in Santa Cruz, Petaluma, Santa Ana and Solano Beach.

On February 4th, Steel Pulse will perform live in Honolulu, Hawai’i for the first time since their New Year’s Eve concert with Matisyahu in 2014. The show will take place at The Republik on the island of O’ahu.

After the trip to Hawai’i, Steel Pulse will continue on, flying to New Zealand and Australia for the One Love Music Festival in Aotearoa, before four-straight dates in Australia from February 11th through the 14th.

For more information on Steel Pulse and all their upcoming tour dates, follow the links below.