One of the most successful independent reggae-rock bands hits the road for their annual Winter Blackout Tour.

The Expendables are rapidly approaching 20-years as a touring band in the reggae-rock genre. Throughout their entire career, the Santa Cruz, California natives have paved their way to success 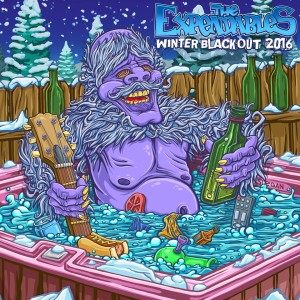 on a strictly grassroots, independent route, including releasing their most recent album Sand in the Sky(January of 2015) with out major label support. The band has remained firm with their independent releases and touring in support of each successive release.

One of The Expendables early touring mates, Slightly Stoopid, has taken the band on as label mates on Stoopid Records, as well as sharing the stage with some of their contemporaries Pepper, Dirty Heads, Iration, Mad Caddies, Less Than Jake, Passafire, and have brought along some of the best up-and-coming talent to play direct support for their headlining tours.

Last year, The Expendables invited Fortunate Youth to play direct support for the annual Winter Blackout Tour, and the reviews were a smashing success at each stop. This year, The Expendables are bringing on multi-talented, multi-instrumentalist, singer-songwriter-musician, Zach Deputy as the opening act for the winter tour.

This year’s edition of the Winter Blackout Tour begins on January 8th in Boulder, Colorado at the Fox Theatre, before The Expendables and Zach Deputy come together on January 15th in San Diego, CA. Locations on the concert circuit include, Arizona, New Mexico, multiple dates in Texas and Florida, before heading up the east coast. The Winter Blackout Tour will conclude on February, 6th in Norfolk, Virginia.

If you are looking to catch The Expendables at a festival setting, the Santa Cruz locals will be performing at the 7th annual California Roots Music and Arts Festival on May 27-29, 2016.

For more information regarding The Expendables and their Winter Blackout Tour, follow the links below.

Video: The Expendables – “Music Move Me”