Perhaps the hottest name in American reggae currently, Stick Figure, will embark on a nationwide tour to begin 2016.

From the musical imagination of singer-songwriter and frontman of Stick Figure, Scott Woodruff emerges a vibrant sonic soundscape, revealed in the newest Stick Figure release in 2015, Set in Stone. As with his previous releases, Set in Stone was 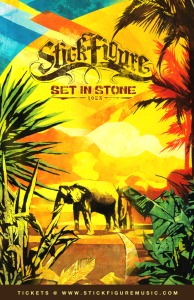 written, produced and recorded by Woodruff, a self-taught musician. And, just like previous releases, the latest album has been an instant success on multiple platforms.

Stick Figure might be the most intuitive marketing outfit in the reggae genre to date. With the Set In Stone release on November 13th, Stick Figure built a buzz for the release with music videos featured on Billboard and Yahoo!, as well as featuring a full album stream on the band’s soundcloud page to increase excitement for the anticipation of the album.

Now, the California based band is making fans anxious with their most recent announcement of a western United States tour in support of the Set In Stone release.

The Set In Stone Tour, headlined by Stick Figure will kickoff on January 15, 2016 in Santa Cruz, California and will run through February 6th, featuring tour stops in Los Angeles, Las Vegas, Denver, Salt Lake City, Seattle, Portland and Arizona among other cities.

The tour will also feature special guests Fortunate Youth from Los Angeles, California and Katastro from Phoenix, Arizona as the supporting acts for Stick Figure on this tour.

Fortunate Youth in their own right is a headlining act, and have been featured as such throughout their career, while Katastro has been featured as opening acts for the likes of 311, Pepper, The Dirty Heads, The Expendables and many more, making the Set In Stone Tour line-up one for the heavyweight class.

For more information on Stick Figure, the Set In Stone album and upcoming tour details, follow the links below.