Rebelution’s Winter Greens Tour has become one of the most sought after American Tours annually and the special guests this year are must see acts.

Bringing together some of the top acts from the United States and Jamaica, not to mention international headlining acts in their own right, Rebelution will be inviting special guests Protoje from Jamaica and New Kingston from New York on their annual Winter Greens Tour.

Rebelution is a root-rock-reggae band that got their start in Santa Barbara, California in 2004, and in 11-years as a studio recording group and international touring outfit, the band has become a must see act on multiple continents. All four of Rebelution’s full-length studio albums have been chart topping hits 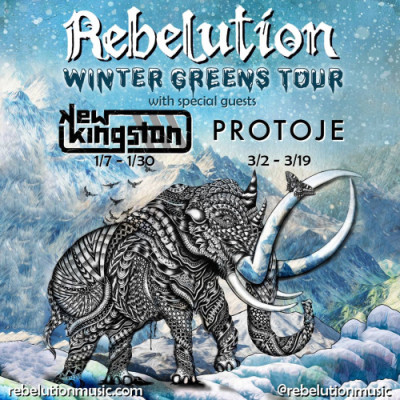 on iTunes, Billboard and the band’s most recent release Count Me In was named Billboard’s top-selling reggae album of the year in 2014.

Rebelution in their own right is a ticket in high demand with each tour stop. But, when the headlining act is accompanied by reggae heavyweights Protoje and New Kingston, the 30-date Winter Greens Tour will be slated to feature numerous sell out crowds throughout the tour.

Protoje, hailing from Kingston, Jamaica, is one of the reggae genre’s fastest rising solo artists. Since his debut release in 2011, many of his singles have reached radio airwaves in the United Kingdom, Canada and reggae stations in the United States, as well as his homeland of Jamaica.

In 2014, Protoje released his third studio album, Ancient Future, a seminal record in the artist’s career, garnering much attention from the mainstream audience. Ancient Future sat at the top of the Billboard reggae chart for over six weeks after the release in March of 2015.

Not to be outdone, New Kingston, has found their own success, signing with the New York based reggae record label, Easy Star Records. The quartet is a family oriented musical outfit of three brothers and their father, originally got their breakthrough as Collie Buddz backing band on tour dates.

With these three artists featured on the Winter Greens Tour, it is safe to say that 2016 will begin a fruitful year for reggae fans in the United States.

The Winter Greens Tour will begin on January 7, 2016 in Florida and will run all the way through March 18th in California.

For more details and complete tour dates and information regarding the Winter Greens Tour, follow the links below.