George “Fiji” Veikoso will be bringing the Poly Tape 2 Tour to the mainland United States this fall. 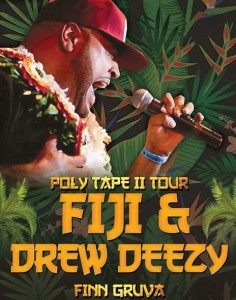 There is no question Fiji and co. are making sure to bring the island sound to the heavily populated Polynesian hotbeds throughout the western United States. In popular culture, American Football teams feature some of the most elite Polynesian athletes from Hawaii, Tonga, Fiji, New Zealand and Australia. They certainly love the local tunes from their homeland, and Fiji certainly inhabits their music playlists.

Now, the devoted fans and friends across the states will have their chance to experience a piece of home, live in concert. And, what better singer to portray the island vibe in vocal form than the legendary Fiji?

The Poly Tape 2 Tour follows up recent tour stops throughout New Zealand, Australia and Hawai’u, which proved to be only the beginning of a full slate of tour dates through the beginning of 2016. Fiji will also be performing at the One Love Music Festival in Tauranga, New Zealand on February 6th.

For those in the United States, mark your calendars. The Poly Tape 2 Tour will begin on November 11th and run through November 28th.

For more information on Fiji and the Poly Tape 2 Tour, follow the links below.