The largest reggae festival in the United States is back for the 7th edition in 2016.. The time has come for the 1st artist announcement to be revealed.

The California Roots Music and Arts Festival has grown exponentially over the bast 7 years in Monterey, California. The Festival grounds have grown in size to accommodate the ever-growing patrons through the gates each year. A prime example of the festival’s growth can be seen in the stages bands perform on.

In the first year, the main stage was the 2015 edition’s smallest stage at the “Cali Roots” Festival. 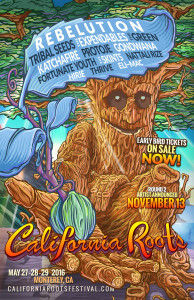 Currently in the festival’s advanced age, the main stage is the same stage Jimi Hendrix had one of his most iconic moments, lighting his Fender Stratocaster on fire. The festival attendance figures have skyrocketed to more than 25,000 for the three-day summer festival.

Now, with seven months before the festival kicks off, the first round of artist announcements have been released.

The California Roots Festival began with mostly local California-based reggae bands, along with one Hawaiian-based roots-reggae band, Ooklah the Moc. Now, the festival features plenty of international talent with artists hailing from Jamaica, Australia, New Zealand, Chile and the United Kingdom, while still staying true to their roots with local California bands featured.

Early Bird tickets are on sale for the three-day festival with the next round of artists announced on November 13th.

For more information of the California Roots Music and Arts Festival, follow the links below.