One of the most legendary reggae bands in History, UB40, is back together and touring! Ali Campbell, Mickey Virtue, Terence Wilson, better known by his stage name Astro are all renuited once again under the name UB40 and on the road touring the United States.

With international success fueled by classic hit songs like “Can’t Help Falling in Love”, “Red Red Wine”, “Impossible Love”, “Cherry Oh Baby” and “Kingston Town” among others, UB40 made reggae a major portion of the soundtrack to the 1980s. There is a reason that after 30 years of touring the globe, fans still continue to sell out arenas and headline music festivals on ever continent; the songs UB40 recorded are timeless. 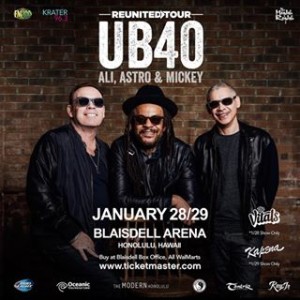 Yet, with all that success, the band has had their own issues internally. What band hasn’t? But, when family is involved, the circumstances are magnified. Duncan and Robin, Ali Campbell’s brothers and original co-founders of UB40, have not spoken to each other in over 6 years. Since Ali Campbell initially stepped aside as the singer of UB40 in 2008, tensions grew and have now resulted in a law suit.

UB40 with Ali Campbell, Astro and Mickey have been touring since late in 2014, and even released an album on October 6, 2014, titled Silhouette. However, Ali’s brothers have continued on touring since 2008 called UB40, although with “a singer who has never made a record,” as stated by Ali Campbell to UK Press last year. Ali Campbell even went as far as to call his brothers’ band “The Dark Side”.

The Reunited Tour with UB40, featuring Ali Campbell, Astro and Mickey is currently in the midst of a world tour. The busy touring schedule is underway in North America with dates in Canada and all throughout the United States, UB40 will soon be making their way through the islands with stops in Honolulu, New Zealand, Australia, as well as South America and home base shows in the United Kingdom.

Many of the shows have been sold out venues, so jump on tickets early for UB40: The Reunited Tour in your area.

For more information regarding UB40, The Reunited Tour and new music, follow the links below.