One of the most recognizable voices in Island Reggae will bring The Island Sound to New Zealand. Joining Fiji will be female solo artist, Tenelle, on the 10-day tour throughout Aotearoa and select dates in Australia.

Fiji is certainly not a stranger to the south pacific, performing throughout Guam, Fiji, New Zealand and of course, all throughout Hawaii. Fiji has been featured on numerous tours with J Boog, Common Kings, 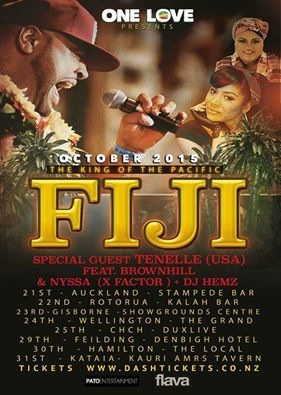 Sammy J, and Pieter T among others on recent tours throughout New Zealand. Now, Fiji will be bringing along fellow solo singer, Tenelle, who is currently on tour in the United States with the aforementioned Common Kings and Sammy J.

Fiji, “the king of the pacific” will kick off the New Zealand leg of the tour on October 21st in Auckland and will conclude on October 31st Up North in New Zealand. In total, there will be eight shows, spanning ten days in New Zealand, including concerts in Rotorua, Wellington, Hamilton, Feilding, Chch and Gisborne.

Tickets are already on sale, so don’t miss out on a show near you.