From San Diego, California, Tribal Seeds has become a mainstay roots-rock-reggae touring act and they are not stopping.

One of the hardest working and constantly touring bands in American reggae culture is Tribal Seeds. The success that this band has reached can be attributed to their relentless schedule on the road, connecting 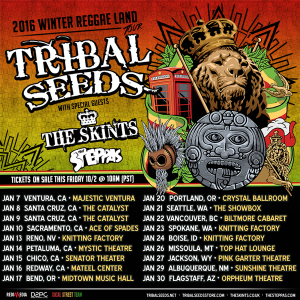 with fans at live shows and churning out multiple Billboard and iTunes reggae chart-topping albums.

Most recently, Tribal Seeds released the full-length album,Representing in the summer of 2014. Perhaps the most interesting aspect of Tribal Seeds’ progression has been the fact that the band has grown and reached the heights it has as a completely independent touring outfit. There are no big record label executives or behind the scene suits funneling money to fund the operation. Tribal Seeds is your quintessential grassroots band.

And, it all started in two brothers’ garage in Southern California. Now, Tribal Seeds is set to embark on yet another nationwide, headlining tour.

On the Winter Reggae Land Tour, Tribal Seeds will be bringing along The Skints from the United Kingdom, as well as The Steppas from the Big Island of Hawaii. This trio of bands are familiar with each other as their respective paths have crossed while on the touring circuit many times. All three acts have performed at the annual California Roots Music and Arts Festival in Monterrey, CA. But, now an entire tour will focus on these three bands.

The Winter Reggae Land Tour will begin after the New Year, spanning nearly the entire month of January and hitting key spots along the west coast of the United States, and even feature a performance in Vancouver, British Columbia.

Prior to embarking on a west coast tour, Tribal Seeds will fly to Tahiti for their first ever performance in French Polynesia. Tribal Seeds has been spreading their music throughout the Pacific Islands recently, performing sold out shows in Honolulu and Kona, Hawaii, as well as, headlining the High Tide Trench Fest in Guam.

For more information on Tribal Seeds, the band’s music and upcoming tour dates, follow the links below.