One of the biggest names in the New Zealand roots-reggae community is House of Shem. Hailing from Aotearoa, House of Shem will be traveling to Hawaii for the first time in 2015 for the Free The Plant Music Festival in Honolulu.

With ten years touring the world with their roots-reggae music, the harmony trio of Carl Perkins and his two sons, Te Omeka Perkins and Isaiah Perkins, have kept to their debut album’s namesake; Keep Rising. 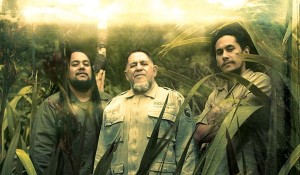 Keep Rising, released in 2008, earned the band worldwide acclaim and increased the fan base exponentially, as the album was easily considered one of the top reggae albums to be released from New Zealand, alongside Katchafire and Fat Freddy’s Drop revolutionary debut albums.

Now, as a headlining act internationally, House of Shem will once again grace the stage in Honolulu, Hawaii. On April 17, House of Shem will join Hawaii’s The Steppas, whom call the Big Island of Hawaii home, as well as the For Peace Band from Guam.

With the proximity of this show to the universally recognized holiday for cannabis connoisseurs, the event’s title is an appropriate one. Since Hawaii became the 50th state in the United States of America in 1959 and the installation of prohibition across America, coupled with the continual war on drugs; Hawaii still remains amongst the states that have not legalized cannabis. Although, in recent political discussions at the capital in Honolulu, Hawaii could soon be nest in line to follow the lead of Colorado and Washington.

What better way to celebrate progress than with the sweet sounds of roots-rock-reggae with some of the most talented bands from the islands!

Video: House Of Shem – “Take You There” (Official Music Video)