Two of reggae music’s top female artists are teaming up for the Queens of the Islands Tour, coming this summer. Hawaii’s Anuhea and Jamaica’s Etana will be sharing the stage throughout the United States.

Etana, which means “strong one” in Swahili, has been releasing music since 2007 with her debut single, “Wrong Address”. Etana’s debut album for VP Records The Strong One was released in 2008 to extensive acclaim while her sophomore album Free Expressions and the 2013 VP Records release, A Better Tomorrow broadened her fan base. 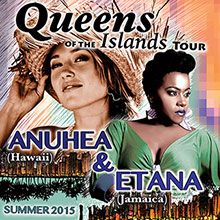 Similarly, Anuhea shares the “One Love” spirit through her soulful sounds from the Aloha State of Hawaii. Since 2007, Anuhea has been a trailblazer amongst the reggae community in the United States with hit singles on Island Reggae stations throughout the Pacific and Western States of America.

Some of the highlights of Anuhea’s musical career have been sharing the stage with Bruno Mars, Jack Johnson, Ziggy Marley, SOJA, winning the award for iTunes Best Reggae Album of 2010 and winning 2 Na Hoku Hanohano Awards (Hawaii’s version of the Grammy’s) for Contemporary Album of the Year and Most Promising Artist.

These two female artists share plenty of similarities, including the same booking agent, Sweetwine Entertainment Group. This tour pairing just feels natural. The sweet sounds of reggae will be bellowing like the waves crashing in paradise from these two Queens of the Islands.

The potential collaborations for this tour will surely be must see entertainment from these two Reggae Empresses on each tour stop. The tour begins on June 3rd in Seattle, Washington and runs through the end of the month.