One of the hardest working artists in the reggae genre, J Boog is hitting the road for an extended nationwide tour, before returning to Hawaii. And, J Boog has some new music for your ears!

Following an extensive touring schedule throughout 2014, which included special guest appearances on the United States Tour with headliners SOJA, J Boog will be showcasing his talents across America with fellow Hawaiian reggae band, Inna Vision from Maui. 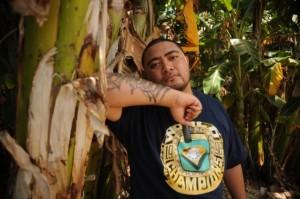 J Boog has been a major name in the reggae genre since he began making music in 2004. With the releases of Hear Me Roar and Backyard Boogie, entertaining a great spectrum of reggae fans and invited new reggae fans around the world to hear his sound, offering a variety of musical roots, including R&B and Rock, all the while reaching the top of the Billboard Reggae charts and iTunes Reggae Album charts.

Most recently, J Boog released the Live Up EP, which reached #18 on the Top Heatseekers chart and #4 on Top Reggae Albums for Billboard Magazine.

But, the live show is where J Boog truly shines. His backing band, Hot Rain also has an accomplished recording history, including collaborations with Morgan Heritage and Peetah Morgan on the song “Good Vibes”.

Special guests for the Keep Di Road Dusty Tour will be Inna Vision, which recently release their own EP, entitled Push EP just prior to the tour commencing this spring, as well as the aforementioned Hot Rain and DJ Westafa.

And, a special treat for J Boog’s fans, the Compton, California native released a new single “Let Me Love You”, which is available everywhere on iTunes currently. So, for all of you lovers of reggae music, grab yourself a copy now.

For tour dates and more information follow the links below.