The 2016 Grammy Award winners for Best Reggae Album, will return to the Hawaiian Islands. 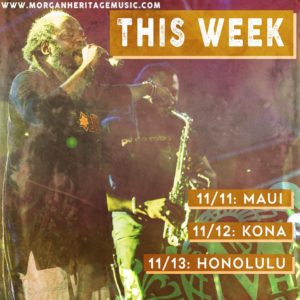 Their most recent studio release, Strictly Roots (2015) was their most successful album, commercially. Since that release, the band has been featured on tour dates with Damian Marley, Stephen Marley, Tarrus Riley, SOJA and Rebelution, as well as headlining their own concerts throughout Europe, the South Pacific, Africa and the United States.

Morgan Heritage has been performing extensively throughout Europe on the So Amazing World Tour, which featured concerts in France, Germany, Italy, Spain, Sweden, Norway, Austria, Netherlands and the United Kingdom, before returning to the United States.

The grand finale of the United States leg of the tour was set to be in America’s 50th state of Hawai’i, beginning on September 7th with shows on O’ahu, Maui, Kauai and the Big Island of Hawai’i. However, due to inclement weather and the threat of Hurricane Lester off of the southeastern tip of the island chain, the tour dates in Hawai’i were forced to be postponed.

Morgan Heritage released an official statement confirming the changes, “Dear Loyal Royals in Hawaii: Due to the potential impact and aftermath of Hurricane Lester, the Morgan Heritage Hawaiian Island Tour is being rescheduled. All current ticket holders for the Big Island and Oahu shows will be honored for the new dates. All Maui ticket holders will be issued refunds due to the venue change. We apologize for any inconvenience. Stay safe Hawaii!”

But, now as time marched on, Morgan Heritage’s tour dates in the islands are finally here. The new Hawai’i tour dates include, Maui on November 11th at the Maui Arts & Cultural Center, the Big Island on November 12th at KB Extreme, and O’ahu on November 13th at The Republik.

Following the show dates in Hawai’i, Morgan Heritage will perform in Japan from November 16-18 at the Blue Note.

For these upcoming shows, fans of Morgan Heritage will have the opportunity to experience the band’s latest single, “Selah”, which featured an accompanying music video released on September 22nd.

With new music on the horizon and countless classic reggae tracks, Morgan Heritage boasts one of the more impressive live acts in the entire genre.