A major part of the Jamaican reggae revival this generation will perform at L.A.’s historic Greek Theatre.

Chronixx, born Jamar Rolando McNaughton, the son of Jamaican reggae artist Chronicle, is among a group of young reggae artists from the “oval rock” in the Caribbean branded as the Reggae Revival. Protoje, Dre Island, Jah9, Jah Bouks, Kelissa and the aforementioned Chronixx, has ignited a torch in people’s hearts and is confidently lighting the path for an entire generation of youths to rediscover roots and culture within reggae music. 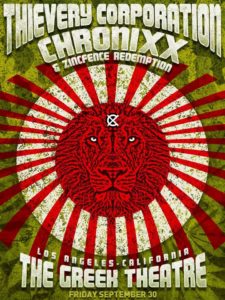 Chronixx and Protoje, in large part, have led this revolution since their recent collaboration on the hit single, “Who Knows”, featured on Protoje’s 2015 release, Ancient Future.

Chronixx’s lyrics range from topical anti-war statements to cautious romantic declarations to rousing anthems of resiliency, which are enhanced in his live performances by audience interactions and an animated delivery, often punctuated by spins and leg kicks.

His pure vocals convey a righteous rage as persuasively as the abiding love he expresses for his native land on “Smile Jamaica”.

That same love will has been shared through a lengthy international tour, which began way back on April 16th at The Coachella Valley Music and Arts Annual Festival in Indio, California. From Chronixx’s Coachella debut all the way through the new year, will be filled with lengthy travel in the United States, Japan, the United Kingdom and much of the European Union.

Chronixx, along with his backing band, Zincfence Redemption, will perform at one of the United States’ most famous venues, Los Angeles, California’s Greek Theatre. Although, Chronixx will not be the official headliner for the show (Thievery Corporation will headline), many, if not most, fans in attendance will be hoping to catch Chonixx’s live performance at the historic venue.

For more information on Chronixx and all upcoming tour dates, follow the links below.