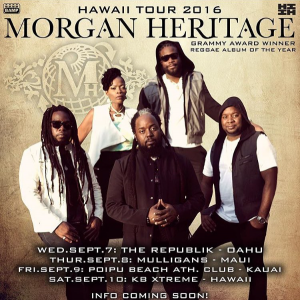 Their most recent studio release, Strictly Roots (2015) was their most successful album, commercially. This past year, the band has been featured on tour dates with Damian Marley, Stephen Marley, Tarrus Riley, SOJA and Rebelution, as well as headlining their own concerts throughout Europe, the South Pacific, Africa and the United States.

Morgan Heritage is performing extensively throughout Europe on the So Amazing World Tour. The tour is featuring concerts in France, Germany, Italy, Spain, Sweden, Norway, Austria, Netherlands and the United Kingdom, before returning to the United States in August.

Perhaps Morgan Heritage’s biggest American show of the summer will be their appearance at Reggae on the Rocks in Colorado. The one-day festival lineup will include 311, Iration and Steel Pulse, among others.

The United States’ leg of the So Amazing World Tour will feature tour stops in Baltimore, Chicago, Seattle, Portland, Salt Lake City and festival dates in California and Virginia.

The Grammy Award winners are certainly not resting on their laurels in 2016.