The final round of artists have been announced for Island Reggae Festival ’16.

The 5th annual Island Reggae Festival has been set for July 9, 2016. The festival will be held at the Santa Clara County Fairgrounds, a much larger venue than previous years, which was hosted at Redwood Amphitheater. With over 60-acres of outdoor space and 167,000 square feet of indoor space, the 5th annual Island Reggae Festival is set to be the largest edition to date. 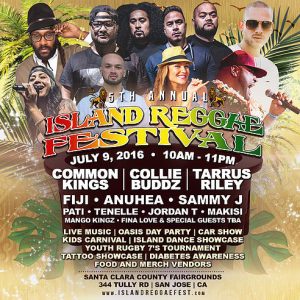 As the final round of artists were announced, the 5th annual Island Reggae Festival will feature headliners Common Kings from California, Collie Buddz from Bermuda, and Tarrus Riley from Jamaica. Displaying the depth of this one-day festival, other performers on the lineup include Fiji, Anuhea, Sammy J, Tenelle, along with the Mango Kingz , Pati, Makisi and one of the top-tier solo artists in island reggae music, Jordan T.

This year’s festival is full of A-List performers, and many of those performers have collaborated together on multiple tracks. Imagine the possibilities of Anuhea and Tarrus Riley singing “Only Man in the World”, or Tenelle collaborating live on stage with Fiji and Sammy J.

Currently, tickets are available for $60 dollars for General Admission and $150 for VIP Passes. Payment plans are also available for those island reggae music lovers whom are tight on cash. After all, reggae music fans won’t want to miss this festival.

For more information on the 5th annual Island Reggae Festival, follow the links below.

Video: Anuhea – “Only Man in the World” (feat. Tarrus Riley)