One of the biggest names in New Zealand music, House of Shem, will tour the United States.

With ten years touring the world with their roots-reggae music, the harmony trio of Carl Perkins and his two sons, Te Omeka Perkins and Isaiah Perkins, have kept to their debut album’s namesake; Keep Rising. 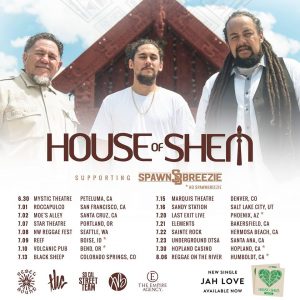 Keep Rising, released in 2008, earned the band worldwide acclaim and increased the fan base exponentially, as the album was easily considered one of the top reggae albums to be released from New Zealand, alongside Katchafire and Fat Freddy’s Drop revolutionary debut albums.

Now, as a headlining act internationally, House of Shem will once again grace the stage in the United Staes. Beginning on June 24th, House of Shem will join California’s Spawnbreezie for 20-dates, including the kickoff show in Las Vegas, San Francisco, Phoenix, Salt Lake City, Portland, Denver and Southern California.

The last time House of Shem performed in the United States, the New Zealand outfit performed with The Steppas from the Big Island of Hawai’i and For Peace Band from Guam, showcasing their talents throughout the state of Hawai’i.

The House of Shem live experience is an unforgettable occasion – a rare mixture of power and beauty. Whether you are Rasta or raver, this band’s incredible tightness, heavenly harmonies, conscious lyrics and blend of traditional and contemporary reggae styles will leave you spellbound.

For more information on House of Shem and all upcoming tour dates, follow the links below.

Video: House Of Shem – “Take You There” (Official Music Video)