One band attributed to bringing mainstream popularity to reggae-fusion in America announced their annual Unity Tour. 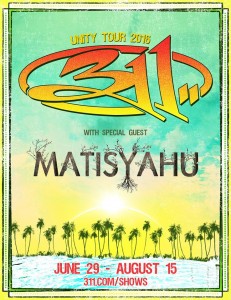 All these years later, and 311 is still releasing new studio albums and touring on their annual summer 311: Unity Tour throughout the United States. This year’s edition will feature special guest Matisyahu, and will span across the United States from June 29th to August 15th.

The band’s announcement came prior to their participation in the Rhythm, Wine & Brews Festival in Indio, California on March 5th, which also featured Matisyahu as a special guest, as well as a week before their biennial 311 Day concert, this time on 3/11 and 3/12 in New Orleans, Louisiana.

Some of the tour stops already revealed include Boston, Chicago, Detroit, Cleveland, New Jersey, New York, Philadelphia, Atlanta, Florida, Maine, New Hampshire, and finishing up the tour in California at the Hollywood Palladium and The Masonic in San Francisco.

Tickets for this summer’s Unity Tour go on sale for the public on March 11, 2016.

For more information on 311 and all upcoming tour dates, follow the links below.