Two of the most recognizable names in reggae have collaborated, but this time under a new name, Rising Tide.

The band names Groundation and SOJA are among the premier reggae acts in the genre today. Groundation has been one of the flagship reggae bands from the United States touring internationally, especially in Europe and Latin America. SOJA has followed that blue print in a similar fashion over the last decade with an incredible amount of success. 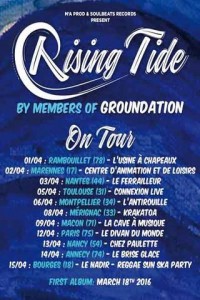 Now, the musicians behind Groundation have formed their own side project, Rising Tide. The new musical project from some of the prominent instrumental band members of Groundation will include Marcus Urani (keys/producer), Ryan Newman (bass), Kim Pommel (vocals), Sherida Sharpe (vocals), Kerry Ann Morgan (vocals), Yotam Silberstein (guitarist) and drummer Paul Spina. Rising Tide has come together to release their first self-titled album on March 18, 2016 via Soulbeat Records.

Fans in Europe will have the first opportunity at witnessing Rising Tide perform live, as the band will embark on a spring tour, beginning on April 1, 2016. The tour will feature dates in Paris, Nantes, Toulouse and Montpellier, among others.

For more information on Rising Tide, follow the links below.