Two of the east coast’s leading reggae-rock bands are teaming up for a tour through the western United States.

Passafire and Ballyhoo! have gone from genre newcomers to veteran touring acts in a blink of an eye. Both east coast bands were originally signed to Hawaiian band, Pepper’s own Law Records early in their career. Now, Passafire, from Savannah, Georgia are members of the New York juggernaut, Easy Star Records team, and Ballyhoo!, from Aberdeen, Maryland has started their own record label, Right Coast Records. 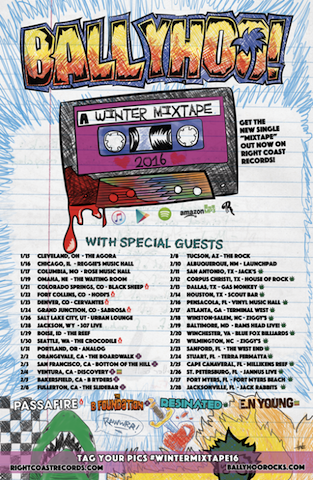 The two bands have toured together in the past, and have shared the stage as special guests to some of the genre’s biggest bands in the United States, such as 311, Slightly Stoopid, Rebelution, Iration, Tribal Seeds, Dirty Heads, The Expendables, and the aforementioned Pepper, among many others.

Many folks in the United States, especially on the west coast, think reggae-rock bands only sprout from the sunny coastline of California, but Passafire and Ballyhoo! have been discrediting that sentiment for over a decade. Now, the east coast duo will be touring those same western states to bring their east side beach party to the west side.

Passafire and Ballyhoo! will embark on a 19-date tour, beginning on January 21st in Colorado Springs, CO. Tour stops will include multiple dates in Colorado, Utah, Montana, Washington and a string of dates in California.

Select tour dates will feature special guests Jon Wayne and the Pain, The B Foundation, E. N Young of Tribal Seeds and Resinated.

For more information on Passafire, Ballyhoo!, each band’s tour schedule and new music, follow the links below.