The Reggae Ambassador from Bermuda, Collie Buddz, has announced his first ever tour through Australia.

It was announced earlier this year, that Collie Buddz would be one of the headlining artists set to perform at New Zealand’s One Love Music Festival on February 6th, 2016. Now, Collie 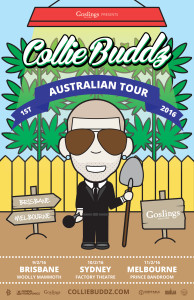 Following the One Love Music Festival, Collie Buddz will perform three shows in Australia. The tour will begin in Brisbane on February 9th, followed by Sydney and Melbourne on February 10th and 11th.

Collie Buddz is certainly not a stranger when it comes to performing internationally. The reggae singer from Bermuda has been a mainstay throughout Europe, performing at some of the continent’s largest and most highly attended festivals, including Germany’s Summer Jam, as well as continuously touring throughout the United States as both a headlining act and supporting act for the likes of Rebelution, Slightly Stoopid and SOJA.

Known for hits such hits like “Come Around”, “Holiday”, and his most recent EP release, Blue Dreamz, fans in Australia and New Zealand will have the opportunity to experience Collie Buddz live and direct this coming February.

For more information on Collie Buddz and his upcoming tour dates, follow the links below.

Video: Collie Buddz – “Light It Up”