This summer, the first Catch a Fire Tour unites generations of reggae’s first family as Stephen “Ragga” Marley and his brother Damian “Jr. Gong” Marley headline a bill that includes their nephew, Skip, and Stephen’s son Jo Mersa. It’s a special summer gathering, which includes a host of reggae artists, and is part of a yearlong celebration of what would have been the late Bob Marley’s 70th birthday.

The tour is named for the Wailers’ 1973 album, which was the record that put the band on the map. 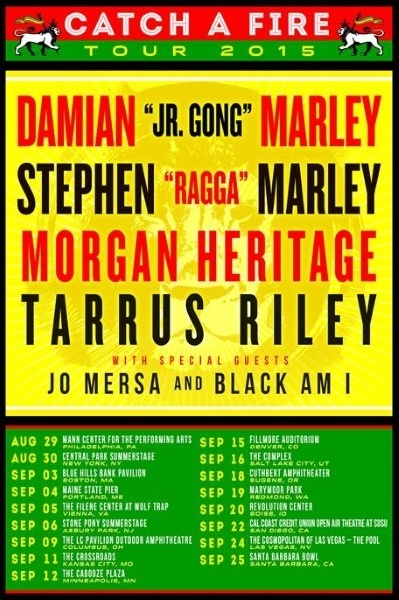 Inarguably, Bob Marley and the Wailers now stand as the Caribbean’s equivalent of the Beatles, and as popular as this music has become worldwide, it is also played a large part in the socially conscious roots reggae movement. It’s the family business, indisputably. Both Stephen and Damian have seven Grammy Awards between the two of them for their musical effort.

Joining the legendary Marley family on tour will be the “Royal Family of Reggae”, Morgan Heritage, as well as Tarrus Riley, all hailing from the island of Jamaica.

This fully-loaded tour will begin in Philadelphia, PA on August 29th. The tour spans 16 states and 17 cities in the United States. Some special guests will also be featured on select dates, including Barrington Levy in California at the Santa Barbara Bowl and the Greek Theatre in Los Angeles.

For more details regarding the Catch a Fire tour, the artists and tickets, follow the links below.