The island of Guam is hosting the first big roots-rock-reggae music festival of 2015, over two days on January 15 and 16. The headlining acts are Hawaiian grown bands Iration and The Green.

Trench Fest receives its name from the Mariana Trench, the heart of the Pacific Ocean that Guam is nestled within. The paramount goal of Trench Fest is to bring awareness and give back to Guam’s ocean environment by engaging the community in a post-festival beach cleanup, while also bringing well-known 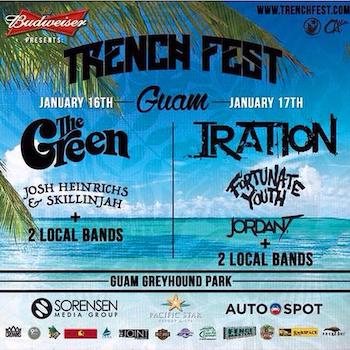 artists and new upcoming talent together in a positive setting. It is safe to say, the organizers of this festival secured an elite lineup in the reggae genre with this year’s event.

Josh Heinrichs and SkillinJah are a one-two-punch of feel good music that will come across the crowd like cool tradewinds. The dancehall and roots fans in the audience will be in for a treat with this particular duo. And, Jordan T has toured with New Zealand’s Katchafire throughout the past calendar year, while also performing as a lead guitarist and backup singer for Maui based band, Maoli. Jordan T also has released a number of hit singles in Hawaii, most notable, 2013’s “Sunset Tonight”.

Trench Fest is set to become a meeting ground where national, international, and local bands come together, not only to provide a gateway for musicians in Guam, but also to expose the unique island culture and beauty that drew them to the island.

Video: Iration – “Back Around” (Live)