As 2015 is underway, it is time to take a look back at 2014 with the best selling reggae album of the year.

Count Me In, the fourth full-length studio album from California reggae band Rebelution, released on June 10, 2014, as a joint venture between the band’s own 87 Music label and New York City’s reggae independent Easy Star Records, is their second consecutive debut in the top 20 on the Billboard Top 200.

Rebelution’s Count Me In entered the Top 200 at number 14 for the week ending June 28, 2014,their best selling debut week to date. Count Me In sold 17,201 copies, according to Nielsen Soundscan. Produced by Rebelution and the sound engineer for Bob Marley and The Wailers at Tuff Gong Errol Brown, Count Me In 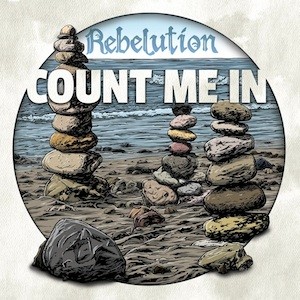 also premiered in the top 5 on several tallies, including the Independent Albums Chart (No.2) and the Digital Chart (No. 4). Count Me In was also the band’s third successive release to debut atop the Reggae Album Chart.

Rebelution’s Count Me In, featured guest appearances by legendary Jamaican singer Don Carlos and reggae artist Collie Buddz from Bermuda. To date, Count Me In has gone on to sell nearly 40,000 units. Count Me In is Rebelution’s third Billboard Chart topper, out selling all other releases of the year on the Reggae chart.

After the success of the full-length album, Rebelution now has decided to allow several charities to benefit from their musical gains, with an upcoming release of a Count Me In Remix EP. Adding to the album version which features a collaboration with the aforementioned Don Carlos, the song “Roots Reggae Music” gets a dub treatment courtesy of Dub Architect, as well as, an extra verse from current Winter Greens Tour mate Logan Bell of Katchafire. The song “Hate To Be The One” is redesigned by Easy Star Records‘ in-house super producer Michael Goldwasser, and Sublime collaborator Marshall “Ras MG” Goodman offers up remixes of album favorites “De-Stress” and title track “Count Me In” which features the late Ikey Owens, Aaron Adams and Courtney Adams.

Rebelution has evolved from a college band performing cover versions of Jamaican hits in the seaside town of Isla Vista, California to a touring powerhouse, crisscrossing the USA and Europe. Their dynamic brand of original music weaves hypnotic threads of alternative-rock and pop, retro-funk, blues, dub, even traditional Middle Eastern strains into their bubbling, one-drop reggae groove. Rachmany’s expressive voice wraps his soul-searching lyrics in beguiling melodies; all characteristics that describe a Billboard Chart mainstay band. Not many thought a reggae band could accomplish that.