How does a band respond on the heels of one of their most successful years in its history? Release a Remix EP in the first month of 2015 with collaborative artists The Green, Katchafire, Iration, J Boog and more!

Rebelution is coming off of a Billboard Best Selling Reggae Album with the 2014 release of Count Me In. Now, some of the fan and band favorites from that chart topping release have been remixed for the Count Me In Remix EP, 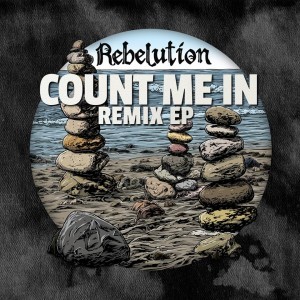 The Remix EP features 5 tracks, with all proceeds being donated to WeCareSolar, Lupus Foundation of America, Jacob’s Heart Children’s Cancer Support and the SurfRider Foundation.

Adding to the album version which features a collaboration with Jamaican Reggae legend, Don Carlos, “Roots Reggae Music” gets a dub treatment courtesy of Dub Architect, as well as, an extra verse from current Winter Greens Tour mates Katchafire. The song “Hate To Be The One” is redesigned by Easy Star Records‘ in-house super producer Michael Goldwasser, and Sublime collaborator Marshall “Ras MG” Goodman offers up remixes of album favorites “De-Stress” and title track “Count Me In” which features the late Ikey Owens, Aaron Adams and Courtney Adams.

The original full-length album, Count Me In, released via a collaborative effort between Easy Star Records and Rebelution’s own 87 Music label in June 2014, featured guest appearances by Don Carlos and Collie Buddz. Count Me In was Billboard’s top selling reggae album in 2014, selling over 17,000 copies in its first week, and was Rebelution’s second consecutive debut in the top 20 on the Billboard Top 200 Chart, entering the chart at number 14. Thus far, Count Me In has gone on to sell nearly 40,000 units. Count Me In is Rebelution’s third Billboard Chart topper, out selling all other releases of the year on the Reggae chart.

Rebelution now has decided to allow several charities to benefit from the Count Me In Remix EP by collaborating with the aforementioned prestigious artists & producers.

Video: Rebelution – Other Side (Live in Chicago, IL)