Katchafire will be coming to the U.S. in 2019, and they will have Jordan T as their special guest.

The Maori band from Aotearoa, Katchafire, recently celebrated their 20th anniversary as a band. Behind the brotherhood and leadership of Logan Bell (vocals/guitar) and Jordan Bell (drums/vocals), as well as Tere Ngarua (bass), the core of the band wrote the legacy of Katchafire into the history books. 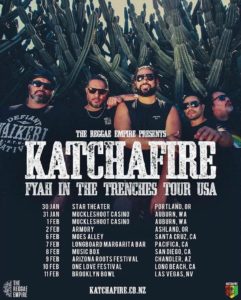 And, the veterans do not show any sign of slowing down.

Fresh off of their headlining performance at One Love Festival in New Zealand, Katchafire will make the 10,000 mile journey from the south pacific to the United States. Katchafire has elected to call this tour, Fyah in the Trenches, and it will feature double-digit shows along the west coast, as well as multiple performances in Hawai’i.

During the upcoming tour, Katchafire will be performing at Arizona Roots Festival and One Love Cali Reggae Fest in Long Beach, which will feature a large handful of some of the biggest performing acts in the reggae genre.

On this upcoming tour, Katchafire will be sharing the stage with Jordan T, a talented singer and guitarist from the island of Maui. Jordan T has been a mainstay on reggae radio stations in Hawai’i and California with his hit song “Sunset Tonight”. Before his solo breakthrough release, Jordan T spent time as touring member of Katchafire and the Hawaiian band, Maoli.

With Katchafire, it is always a fun-loving family affair. This upcoming tour will follow suit. The tour stops will include Oregon, Washington, California, Arizona and Nevada.