Hawaii’s own Iration followed up their highly successful release of Hotting Up in 2015 with an all acoustic album.

One of the elite bands in the American reggae movement, Iration, has released their first all acoustic album, Double Up. 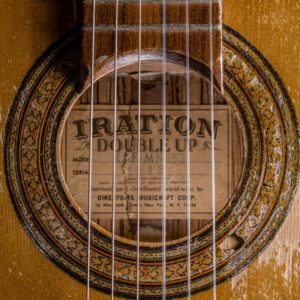 Officially released on December 2nd via the band’s own independent label, Three Prong Records, Iration’s acoustic album features a mix of the band’s hits from their previous releases, including “Reelin” from their most recent full-length album Hotting Up (2015), “One Way Track” and “Back Around” from 2013’s Automatic, “Summer Nights” from Fresh Grounds EP (2011) and “Time Bomb” and “Falling” off the 2010 Time Bomb album release.

Both Hotting Up and Automatic peaked at #1 on Billboard‘s Reggae Albums Chart with Time Bomb reaching #2 on the chart.

“We’re really pumped to announce the release of Double Up, our new acoustic release. We took songs from our whole catalog of music and stripped them back and gave them an alternate life,” Micah Pueschel (vocals/guitar) stated. “We thought about a wave doubling up and the fact that it’s another version of the same entity. That’s what Double Up is, another version of these songs.”

Recently, Iration gave a slight hint that an acoustic album was in the works, releasing “Backyard Session” videos of stripped down, acoustic renditions of old fan favorites. Now, fans will have an entire album’s worth of music to listen to rather than individual clips of their favorite tracks.

The good news doesn’t end there for Iration fans. The band will embark on the “Lost & Found Winter Tour,” a four-week headlining West Coast outing from January 13 through February 10 featuring support from Jamaica’s Protoje and American folk artist, Zach Deputy. Additionally, Iration will return to the One Love Cali Reggae Festival on February 11 at the Queen Mary in Long Beach.

For more information on Iration and the band’s new acoustic album, Double Up, follow the links below.

Video: Iration – “Back Around” (Backyard Sessions)