The Island Sound takes a look back at the Exclusive Interview with Harrison Stafford, the frontman of Groundation.

On June 11. 2016, The Island Sound published the Exclusive Interview with one of the most 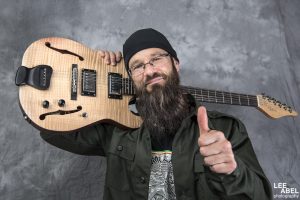 Born in California to a Jewish family, Stafford was exposed to Jamaica and the Rastafari community on winter and summer trips with his family throughout his childhood.

The music, the energy, and the message spoke to the young reggae student, whom would soon become the man we know today.

Throughout the years, Harrison Stafford formed one of the most successful reggae bands in history to come out of the United States, as the lead singer of Groundation, and created and taught his own course, The History of Reggae Music, at the college level, and even produced one of the more influential documentaries on Rastafari and Haile Selassie.

Now, Stafford has released his latest solo album, One Dance. In celebration of his latest studio recording, Harrison Stafford spoke with The Island Sound, discussing his lifelong involvement with reggae music, the country of Jamaica and his passion for singing about love, justice and harmony.

Here is a preview of our Exclusive Interview with “The Professor”, Harrison Stafford of Groundation…

The Island Sound: Not many reggae artists or bands from the United States are welcomed with open arms in Jamaica. With your time spent in Jamaica, how do you feel you, as The Professor and Harrison Stafford, the frontman from Groundation, have been received by the Jamaican reggae community?

Harrison Stafford: Most of the musicians in Jamaica know Groundation from performing at festivals all around the world. From many of my friends that I know, there is a big following in St. Ann’s Bay and even Ocho Rios. I went to Calabash, the Ital Rasta Restaurant, and an elder Rasta Dread came up, recognized me and couldn’t believe he met me. I didn’t expect this elder Rasta to know Groundation. I think it comes from the fact that we are militant and we are focused. I love to play roots music and the message is 100% about equal rights and justice, while forming a better world for our children. I think Jamaicans feel that. Jamaicans judge you on the music and the works that you do, not judging a book by its cover.

The Island Sound: In the music industry, many performers across all genres have been granted nicknames by their audience, fans or contemporaries. In the reggae genre, you are referred to as The Professor. How does that nickname feel to you?

Harrison Stafford: It feels interesting. I am definitely honored to have that nickname. I am proud of teaching the History of Reggae Music, to which I was a professor at the university level. I think some of the first people who started calling me the Professor were Horsemouth, Israel Vibration, the Congos and Rocky Allen Bailey. It made sense, because that is how they really knew me, was teaching the history of this music. When I released the first solo album in 2011, under the name of Professor, I thought it was very fitting. It was me, embracing the name Professor. The album was about my pilgrimage in the West Bank and occupied territories of Israel, while trying to represent that Palestinian voice. To me, that was really me, professing about that situation. I have embraced and really come to love that name, Professor.

For further reading of the full-length, exclusive interview, Click Here.