The Brooklyn, New York-based band, New Kingston is set to return to the United States for a fall tour. 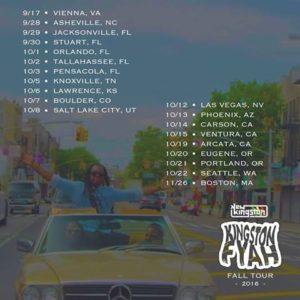 In the early days, New Kingston performed locally in New York at parties around town. It wasn’t long before their talent was noticed by some of the biggest performers in the reggae genre.

New Kingston began touring nationally as a backing band and opening act for Collie Buddz from Bermuda, as well as being featured as a supporting act on tours with SOJA, Rebelution, Beres Hammond, The Green, Matisyahu, and many others. Before long, New Kingston soon propelled their live show into a headlining act, being featured at Summerjam in Germany and California Roots and Reggae on the River in the United States.

This past summer, New Kingston will return to Europe with fellow labelmates Easy Star All Stars, and the band will be bringing new music following the release of Kingston City (2015).

New Kingston also performed at various festival dates all summer long in the United States, including appearances at Reggae in the Desert, Sierra Nevada World Music Festival, Reggae on the River, and many more, including a one-day performance with Sublime with Rome and Tribal Seeds at Red Rocks Amphitheatre in Colorado.

Now, the band will embark a full-length, headlining national tour. Beginning on September 17th, New Kingston will perform 20-shows over the next two months. Some of the key tour stops in the United States include, five dates in the state of Florida, three dates in California, as well as, major metropolitan show dates in Denver, Las Vegas, Salt Lake City, Phoenix, Portland, Seattle, and many more.

For more information on New Kingston, follow the links below.