One of the most recognizable names in international reggae is set to release his fourth studio album, Stony Hill.

The Grammy Award winning, multi-platinum reggae artist, Damian “Jr. Gong” Marley has announced his plans to release his most recent studio effort, Stony Hill, on October 28, 2016. It has-incredibly-been eleven years since Jr. Gong’s most recent release, Welcome to Jamrock. The anticipation has been building for the long awaited follow up release. 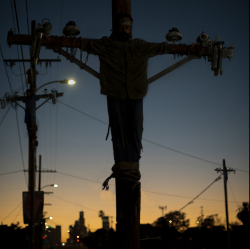 Fans will not have to wait too long for Damian Marley’s latest release. The first single, “Nail Pon Cross” (Jamaican patois for “nailed on the cross”), has already released a widely viewed music video to accompany the release. The music video was filmed in Los Angeles, and directed by Darren Craig. The video was released exclusively through the hosting site, Tidal.

The extremely graphic music video lends a detailed visual aid to the descriptive, soul-searching and heart-pounding bible verses rehearsed in the track. In moments of the video, Damian Marley is even strapped to a typical Los Angeles power line, making the in-your-face, jaw dropping return the son of the legendary Bob Marley chose to make.

This past summer, Marley released another single off his upcoming album, titled “Caution”, which features an uptempo beat with a lush string part behind Marley’s signature patois-laden reggae/hip-hop vocals.

Currently, Damian Marley is in the midst of a tour throughout Europe, performing live in Netherlands, France, Germany, Czech Republic, Hungary, Croatia, Italy, and the United Kingdom. In the fall, Damian Marley will set sail on the annual Welcome to Jamrock Reggae Cruise, which will feature performances by brother Stephen Marley, Toots and the Maytals, Steel Pulse, Sean Paul, Tarrus Riley, Bounty Killer, Junior Reid, Half Pint, Collie Buddz, J Boog, Kabaka Pyramid and many more.

Since the release of Welcome to Jamrock, Damian Marley hasn’t necessarily been inactive in his musical career. Jr. Gong has released numerous singles, produced other artists and released albums with the super-group SuperHeavy, and the collaborative effort with NAS, Distant Relatives, as well as, album releases through Ghetto Youths International.

However, it appears the wait is finally over for a new album from Damian “Jr. Gong” Marley.

For more information on Damian Marley and his upcoming album release, follow the links below.