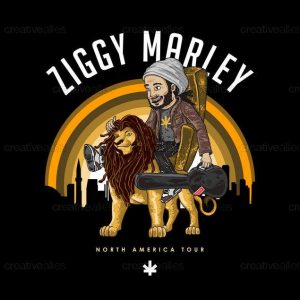 David Nesta “Ziggy” Marley is the son of Reggae legend, Bob Marley. In 2003 to release his first solo album, Dragonfly and in 2006, he released Love Is My Religion, which won the 2006 Grammy Award for Best Reggae Album.

Most recently, Ziggy Marley released his latest self-titled album on May 20th, which has reached the top of the Billboard Reggae Charts. Following the album release, Ziggy Marley was also featured on network television with his appearance on the Late Show with Stephen Colbert.

Currently, Ziggy Marley is in the midst of a nationwide tour throughout the United States, as well as select dates in America’s northern border country, Canada. The tour will run through October 14th, featuring tour stops in Los Angeles, Seattle, Portland, Salt Lake City, Montreal, Winnepeg, and more, including the aforementioned New York concert.

Joining Ziggy Marley will be Grammy award-winning reggae band Steel Pulse have been true to their roots for over 35-years. Popular hits by Steel Pulse include “Taxi Driver”, “Steppin Out”, “Chant a Psalm” and “Roller Skates”, just to name a few. Recently, Steel Pulse and lead singer, David Hinds, have been in the process of filming and producing a documentary titled, Dreadtown .

Fellow performing artist at the June 25th concert in New York, MaxiPriest is best known for singing reggae music with an R&B influence. Maxi Priest most successful hits includes “Just a Little Bit Longer”, “House Call” and “Close to You”.

The one-day festival is a presentation of Live Nation in association with Jammins Events. Tickets are available, starting at $30 and topping off at $90 for premium seating.