Volume Six of this charity album features thirty of the top talent and up-and-coming artists and bands in reggae.

Music Unites is musical compilation put together to spread the love and consciousness of reggae music throughout the whole world, giving back the proceeds to children that have lost their music programs in schools and communities due to underfunding. 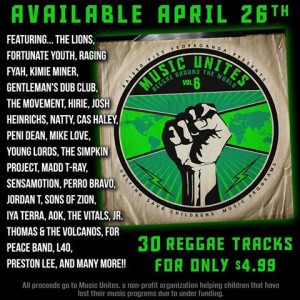 Music Unites describes their mission: “to help build each other up, rather than break each other down. Music is not a competition, and it isn’t just one band that is going to make it. With all of us working together, we not only have the ability to help each other, but we have the ability to change the world. Artists have more power in the world than Politicians. We just have to Unite and Stand for what is right in the world!”

The album includes 30-tracks and is available for purchase on all digital outlets for a small donation of $4.99.

For more information on Music Unites and the latest compilation volume, follow the links below.