One of the most successful American based reggae bands, Iration, will bring a brand new album on tour through the United States. After the August 28th release of Hotting Up, Iration will tour over 20 states on the mainland, with multiple stops in some states.

Iration will be on tour with fellow Hawaiian roots reggae band, The Green, as well as familiar touring partners, The Movement and Hours Eastly, both calling 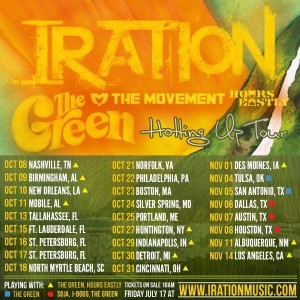 the East Coast home. It wasn’t long ago, that Pepper, which also hails from Hawaii, brought Iration out on their first nationwide tour. Iration returned the favor with The Green a few years back on the Time Bomb Tour, and has continued that stance with inviting Hours Eastly on their first tour last spring, and now a second round of dates throughout the country.

The Hotting Up Tour will feature headlining shows in New York, four shows in Florida and the tour finale at the historic Hollywood Palladium in Los Angeles, CA. However, a bright spot of this particular string of shows will occur in Texas, when Iration will join SOJA, J Boog and The Green for three-straight shows in Dallas, Austin and Houston. There is nothing quite like tour phenomenal tours come together in the same town at the same time, creating an all-star lineup of reggae music.

Tickets are already on sale for the Hotting Up Tour. So, do not miss out on the show near you.