One of the premier roots-rock-reggae bands from Jamaica featured in the latest editorial.

Listening to the introduction: “All the way from Kingston, Jamaica…” plenty of memorable reggae pioneers come to mind. This list or musical icons truly is endless. Beginning with Bob Marley and The Wailers, the island capital became common knowledge in the past, the present, and will certainly remain fit in the future. Reggae music sprouted from Jamaica over fifty-years ago, and to this day, the beat

still goes on stronger than ever.

With The Wailers continuing to tour, with lone original member Aston “Family Man” Barrett on bass, there is still a standard to hold in traditional Jamaican roots-rock-reggae. One band that is climbing the ladder approaching that renowned status is Rootz Underground. All six members joined together in the musical manor of Kingston Town. The same streets walked by Marley, Peter Tosh and dancehall kingpin, Yellowman, Rootz Underground are leaving their own footprints.

Beyond their beautiful reggae sound, Rootz Underground comes complete with the look, as well. Lead singer Stephen Newland has a striking resemblance to the great legend, Bob Marley, going far beyond the recognizable dreadlocks. Newland’s onstage showmanship could be placed side-by-side with Marley, and the only difference would be grainy film and high definition quality footage.

Although Rootz Underground is a band, they travel around in their tour bus as a family, not as your typical highbrow rock stars. Their eyes have taken in the natural setting of nearly thirty countries and shared the stage with iconic artists like Gregory Isaacs, Toots & The Maytals, Israel Vibration, Stephen and Ziggy Marley, among many others. The tales Rootz Underground could share would be abundant.

The Interaction…
With an open armed welcome, the band gathered before their third show in as many nights, yet each member was cheerful and anxious to play for a relatively new audience. Talking with Paul Smith (Keyboard/Vocals) as the crowd began to enter the venue, he explained the band’s joy and motivation for their tour, “It has been quite awhile since we have even played in the United States. It took a lot for us to get here, plenty of practice, lots of time, and a couple of planes and airports. Fans expect a proper show and we prepare and prepare for these moments.” 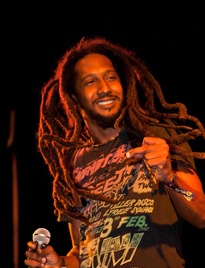 Most fans think a concert just happens. There are countless hours devoted to making sure every aspect of a live show runs smoothly, let alone an entire tour. The musical art alone is a 24-hour a day job, without the behind the scenes labor. But, with tireless labor, produces a finely crafted finished product.

Rootz Underground has been playing music together for over ten years, yet even before taking their show public, Stephen Newland displayed his devotion to carrying out his musical aspiration since a youth…

“I always wanted to be a part of a big group, playing music for love, captivating an audience with a message, and keep it true. I always had a lot to say… something to stand up for what I thought was right in the world and all the harm within the world too. It’s all about making the true and honest connection and spreading a pure message.”

The Passion…
The pure message Newland and Rootz Underground referenced was that of Rastafari. With Soul Rebel shirts and “chant and plant” garb, their message was visually and vocally profound. None of the six members were shy about the impact of local culture in Kingston and the lyrics, which Bob Marley contributed on their journey to the stage.

“Whether it was walking down the street and hearing riddims being played from a radio or from one of the houses, Bob was there. It was music that was prosperous and righteous. The music was there, and the people were always dancing,” Newland said. “Each of us learned those songs before anything else. It wasn’t always easy, you know? Our life is music, and we just keep feeding our passion.”

The Tradition…
Rootz Underground’s lifelong passion has now transformed into a ritual. Another ritual that the band undertakes each night is a pre-show family dinner. No matter what city or what venue, the family gathering is firmly placed in their daily schedule, and a pre-show requisite. Take it as bonding time, both for the band and their stomachs.

“It’s nice to be on the road and playing this music for all these people, but sometime’s you miss that home cooked meal, talking with family, conversing, all the sharing. We try to take as much from home 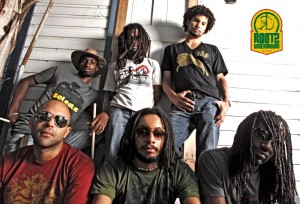 to bring it here, at least in spirit. Tonight we are very fortunate for these cooks here,” humbly stated by Smith before going inside to eat with the rest of the band.

With my head on a swivel between an onstage performance by The Simpkin Project as the opening act and Rootz Underground’s family feast in the green room, my mouth was agape. Their sacrifice of breaking bread was complete with sweet reggae music joining together as their prayer psalm. They didn’t look like rock stars, high-maintenance musicians or anything of the ilk, they became brothers in arms coming together in the oldest of traditions with the oldest form of entertainment at their side.

The Performance…
The entertained soon became the entertainers, as it was time for Rootz Underground to continue the tradition laid out before them by so many familiar names, playing with their instruments and sending the message within Jah Music. When the music starts, the band becomes the 21st century rendition of pure Jamaican reggae. The energy that exudes from the stage is unmatched on any musical platform or genre. Although, Leon Campbell is calm, cool and steady in the pocket playing drums, the full sound of Rootz Underground propels Stephen Newland into the ideal frontman for the crowd’s viewing pleasure. At times, I was worried his head would hit the low overhang above the stage, as his long dreadlocks were used as the warning sign.

Rootz Underground’s style is all encompassing, bringing heavy roots reggae, coupled with a bluesy, rocksteady style, as well as background harmonies reminiscent of the I-Three, yet there are no female singers present. Even at times, Newland brought a new age hip-hop delivery to their set. 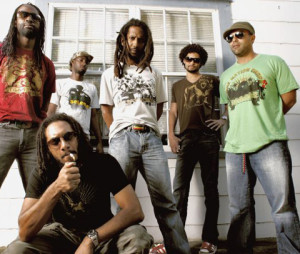 Their music is a spectacle of great proportions. As a band, Rootz Underground has not rested on their laurels, following one, lone blueprint. Their first full-length studio release in 2008 displayed their diversity in recording sessions, and Rootz Underground’s live performance went the extra mile, with extended instrumentals, as each band member was highlighted.

Sharing the musical wealth for each instrument to bloom allows the live performance to reach the summit for all the fans and members onstage. As Rootz Underground melded crowd favorites “Time Is An Illusion”, “Farming”, “Rastaman Experience” and “Unknown Soldier”, as a whole they displayed their desire to continue this movement and growth from the forefathers of reggae with their song “Hammer”, turning a new twist on an old timeless tune.

The Aftermath…
However, when the music stops, the show carries on for Rootz Underground and their fans. The same hospitality they provided in our first greeting earlier, each member of the band extended their hands to fans waiting alongside their dressing room entrance after the performance. And, the line wasn’t exactly an express lane.

Thirty minutes later became an hour, and then nearly two hours since their final song onstage, but as each fan went into great detail about how they heard about this Kingston Town diamond in the rough, what their favorite aspect of the show was, or what great lengths they ventured to catch a Rootz Underground show, it was a sight for sore eyes to see. At one point, a group of eight members of a local Native American tribe sparked the interest of frontman Stephen Newland, as they kept allowing fans to go in front of them in line, hoping for exclusive time with the band as the honorable “last fans standing”.

Once they described their nearly 400-mile mission to see the band in person, Newland, Paul Smith and Colin Young (Bass) inquired about their community, as is their fashion in each of their new territories they travel to each day. The interaction continued on with photos and autographs with all of the tribe members. Observing from behind the camera, one can only cherish the moments that these fans received, but it’s a touching moment for the band members, as well. 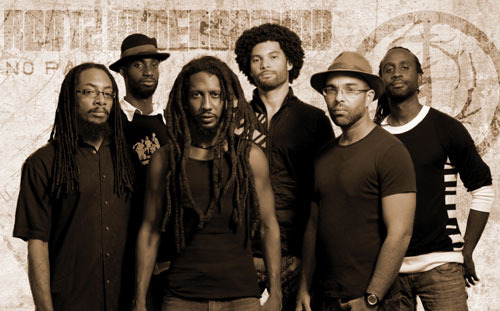 “No matter what country we are in or what town we come to play in, we give as much time as possible to these fans, because they keep us going,” Smith said with excitement. “When it has been a full day’s work and you are exhausted from the show, you can see these fans and what we do means to them. We feel great. They have fun. It’s a blessing! All we can do is give thanks.”

Both the excitable fans awaiting a handshake and each band member extending pleasantries cherish these moments deeply. The daily grind no longer carries so much weight, while Rootz Underground’s performance places their crowd on cloud nine, before, during and after their live shows. Fans only wished they stopped in each town for a longer duration.

The Movement…
With their tour bus and equipment trailer hitched up and set to hit the open road once again, the only lights left illuminated in the near vicinity resided in the parking lot. One more spotlight and camera flash awaited with the remaining contingent gathering for one last group photo and final salutations.

Back home in Kingston, Rootz Underground is far from an unknown commodity. Internationally, they carry that same cache. Stateside, the Underground name fits for now, but with each tour stop and each handshake with an adoring fan, they are taking steps to being the roots-rock-reggae standard, for true, soulful and authentic reggae music.

By the time their profile hits the highest peak, there is no questioning the band’s mentality will remain consistent. Humble, hospitable and ever thankful; all words that often don’t describe your everyday musicians. Rootz Underground is not your average band, they are a family, that takes their musicianship to heart, each and everyday. As they said, “Music is our life, and we just keep feeding our passion!”